This is the second part of the blog series, for part 1, see ：Kylin on Cloud — Build A Data Analysis Platform on the Cloud in Two Hours Part 1

As we can see, when the query hits the cube, that is, the query is directly answered by the pre-computed data, the query result is returned in about 4s, a great reduction from the over 100s of query latency.

In this test, we used the New York taxi order data with fact table containing 200+ million entries of data. As we can see from the result, Kylin has significantly improved the query efficiency in this big data analysis scenario against hundreds of millions of data entries. Moreover, the build data could be reused to answer thousands of subsequent queries, thereby reducing query cost.

Import Dataset into MDX for Kylin

With MDX for Kylin, you can create Dataset based on the Kylin Cube, define Cube relations, and create business metrics. To make it easy for beginners, you can directly download Dataset file from S3 and import it into MDX for Kylin:

Data analysis with BI and Excel

Let’s take Tableau installed on a local Windows machine as an example to connect to MDX for Kylin for data analysis.

Drag and drop BOROUGH under PICKUP_NEWYORK_ZONE to Columns, and drag and drop ORDER_COUNT and trip_mean_speed under Measures to Rows, and display the results as a map. The color shade represents the average speed and the size of the symbol represents the order number. We can see that taxi orders departing from Manhattan are higher than all the other boroughs combined, but the average speed is the lowest. Queens ranks second in terms of order number while Staten Island has the lowest amount of taxi activities. The average speed of taxi trips departing from the Bronx is 82 mph, several times higher than that of the other boroughs. This also reflects the population density and the level of economic development in different New York boroughs. 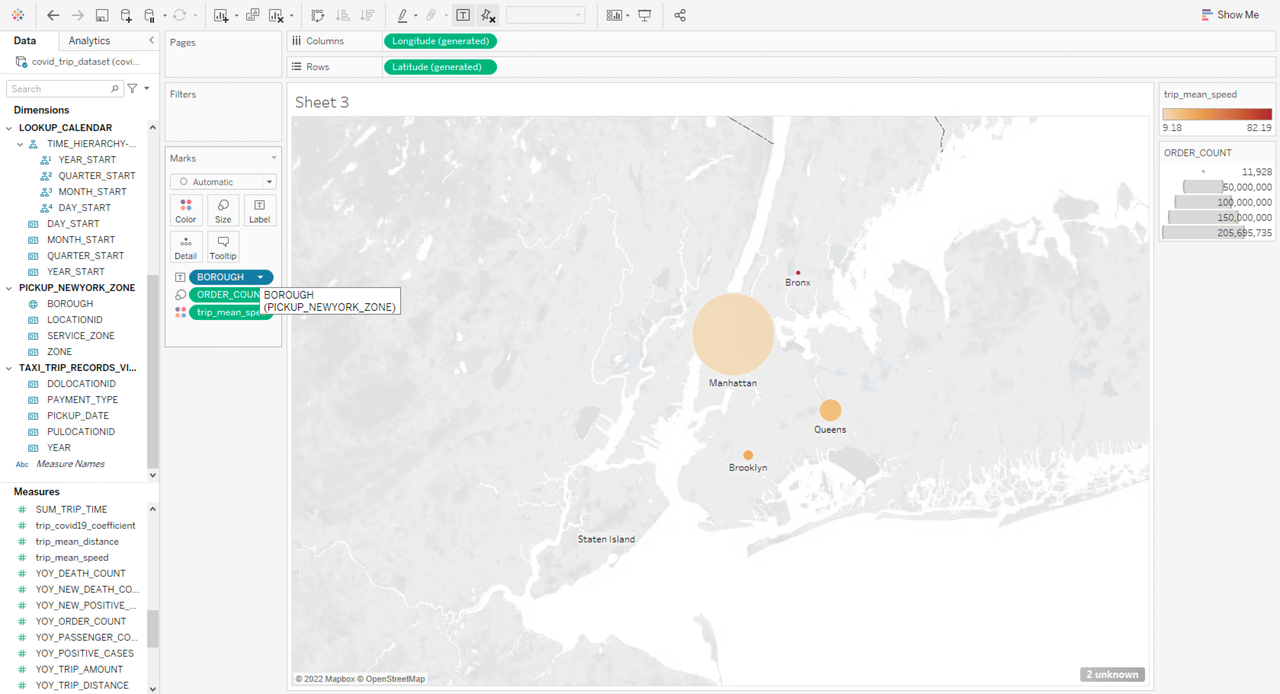 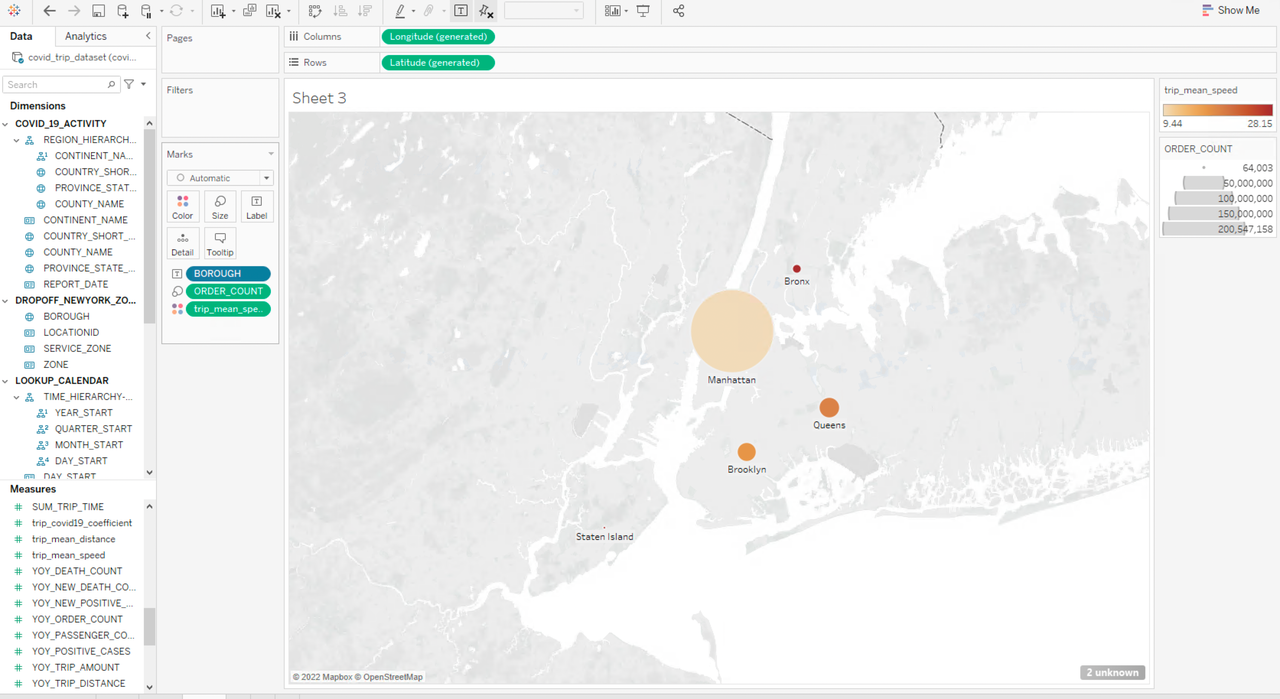 The pick-up and drop-off data of Brooklyn, Queens, and Bronx differ greatly, for example, the taxi orders to Brooklyn or Bronx are much higher than those departing from there, while there are much fewer taxi trips to Queens than those starting from it.

To analyze the average trip mileage we can get the residents’ travel habit changes, drag and drop dimension MONTH_START to Rows, and drag and drop the metric trip_mean_distance to Columns: 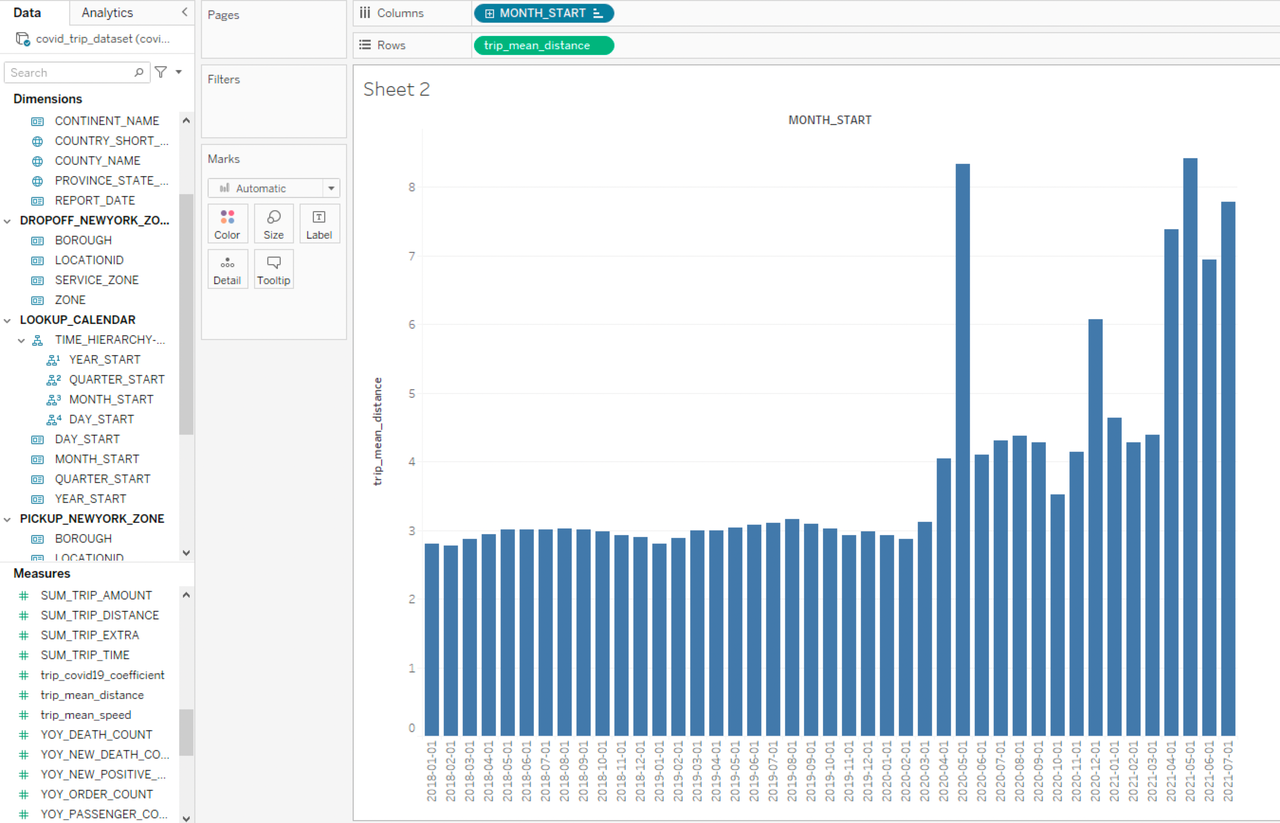 Based on the histogram we can see that there have been significant changes in people’s travel behavior before and after the outbreak of COVID-19, as the average trip mileage has increased significantly since March 2020 and in some months is even several times higher, and the trip mileage of each month fluctuated greatly. We can combine these data with the pandemic data in the month dimension, so we drag and drop SUM_NEW_POSITIVE_CASES and MTD_ORDER_COUNT to Rows and add PROVINCE_STATE_NAME=New York as the filter condition: 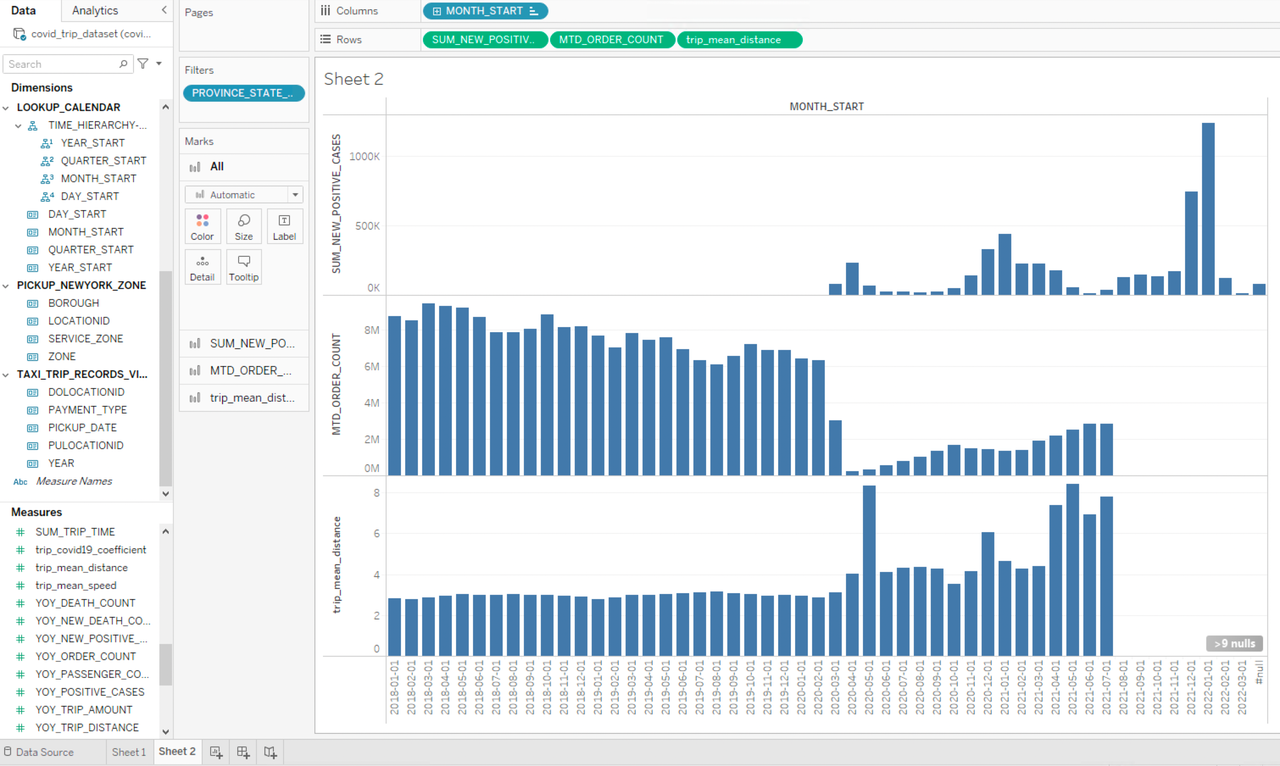 With MDX for Kylin, we can also use Kylin for big data analysis with Excel. In this test, we will use Excel installed on a local Windows machine to connect MDX for Kylin. 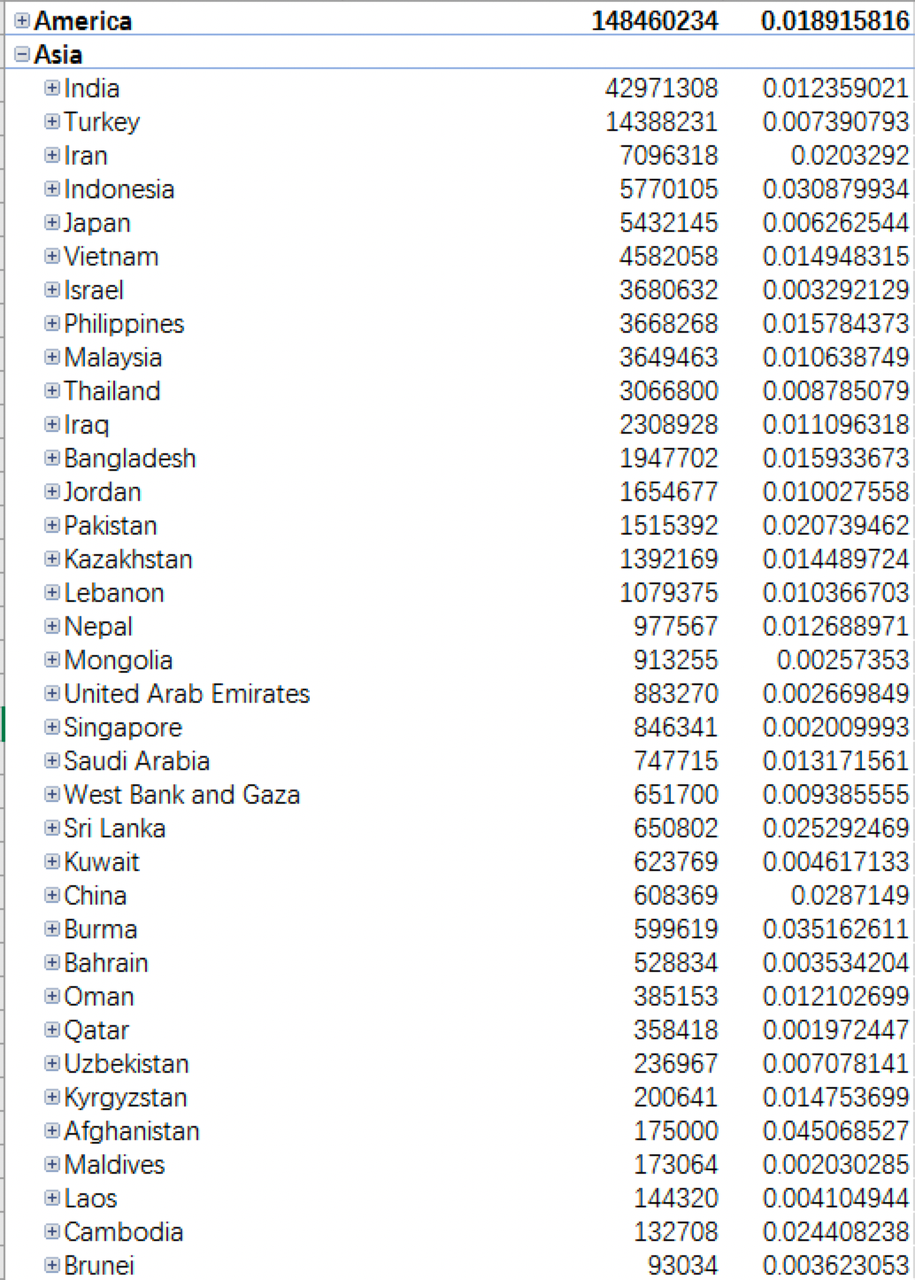 The data shows that India, Turkey, and Iran are the countries with the highest number of confirmed cases.

Click to expand the time hierarchy to view the data at quarter, month, and even day levels. By selecting MOM_ORDER_COUNT and ORDER_COUNT, we can check the monthly order growth rate and order numbers in different time hierarchies: 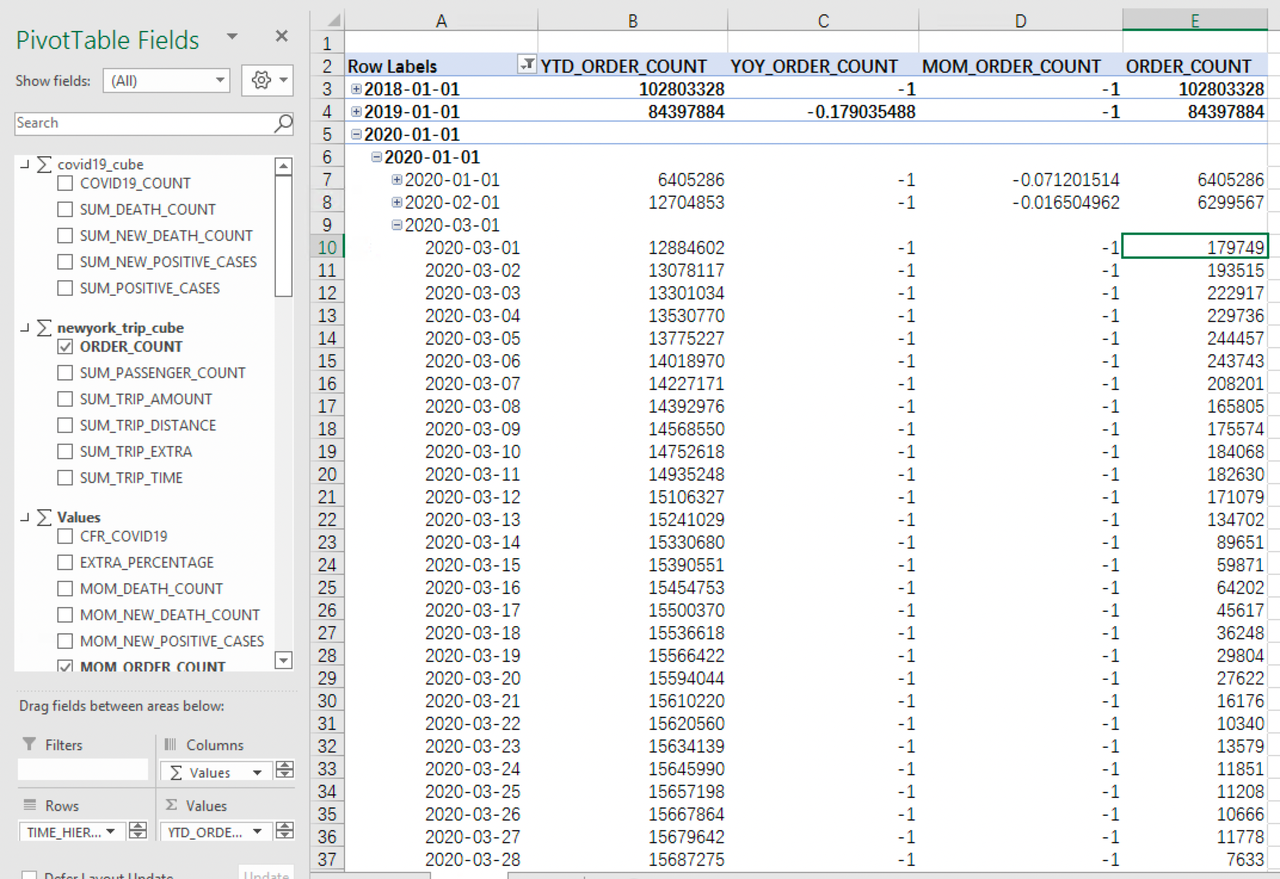 The order growth rate in March 2020 was -0.52, which is already a significant fall. The rate dropped even further to -0.92 in April, that is, a 90% reduction in orders. Then the decreasing rate becomes less obvious. But taxi orders were still much lower than before the outbreak.

Use API to integrate Kylin with data analysis platform

We also provide a simple demo for our users, you may click mdx query demo to download the source code.

Make sure Java 8 is installed before running the demo:

Two parameters are needed to run the demo: the IP of the MDX node and the MDX query to be run. The default port is 7080. The MDX node IP here is the public IP of the Kylin node.

Or you could just enter the IP of the MDX node, the system will automatically run the following MDX statement to count the order number and average trip mileage of each borough according to the pickup ID:

We will also use the default query in this tutorial. After the execution is completed, we can get the query result in the command line:

As you can see, we have successfully obtained the data needed. The result shows that the largest number of taxi orders are from Manhattan, with an average order distance of only about 2.4 miles, which is reasonable if we consider the area and dense population in Manhattan; while the average distance of orders departing from Bronx is 33 miles, much higher than any other boroughs, probably due to Bronx’s remote location.

As with Tableau and Excel, the MDX statement here can directly use the metrics defined in Kylin and MDX for Kylin. Users can do further analysis of the data with their own data analysis platform.

We have demonstrated 3 ways to work with Kylin + MDX for Kylin, from which we can see that with the help of Kylin multi-dimensional database and MDX for Kylin semantic layer, no matter which data analytic system you are using, you can always use the same data model and business metrics and enjoy the advantages brought by unified semantics.

After all cluster resources are deleted, there should be no Kylin deployment tool-related Stack on CloudFormation. If you also want to delete the deployment-related files and data from S3, you can manually delete the following folders under the S3 working directory: 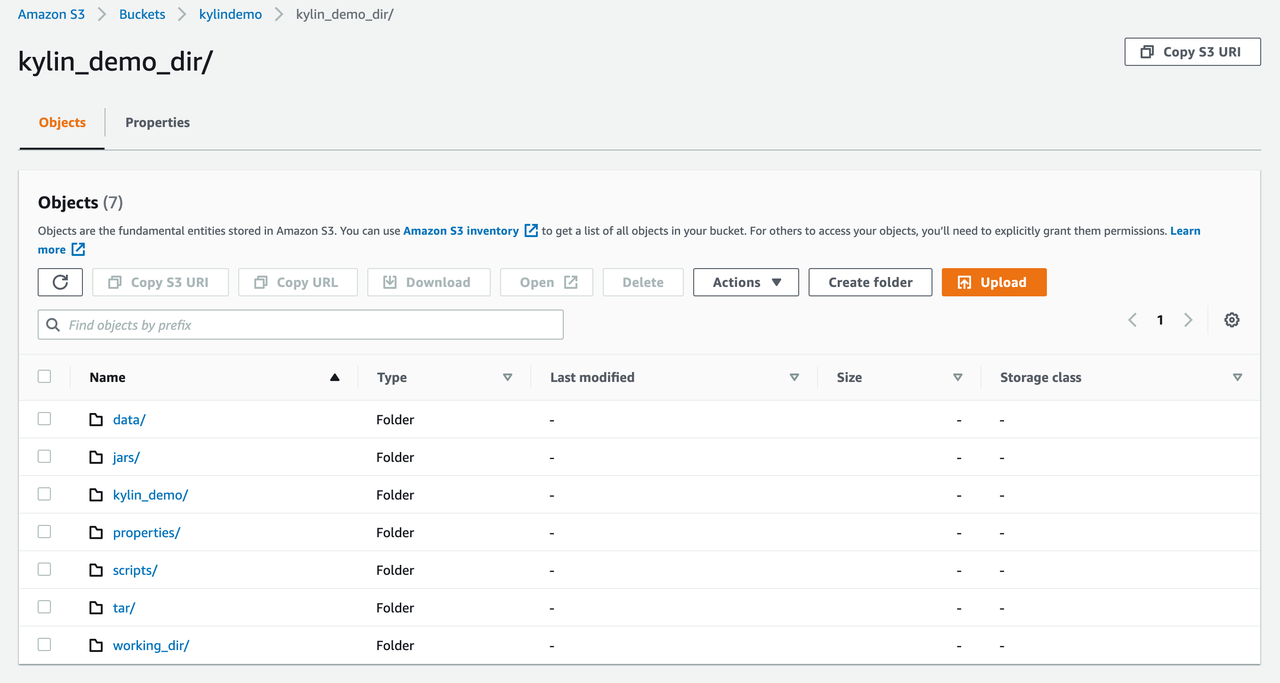 You only need an AWS account to follow the steps in this tutorial to explore our Kylin deployment tool on the Cloud. Kylin + MDX for Kylin, with our pre-computation technology, multi-dimensional models, and basic metrics management capabilities, enables users to build a big data analysis platform on the cloud in a convenient way. In addition, we also support seamless connection to mainstream BI tools, helping our users to better leverage their data with higher efficiency and the lowest TCO.