Currently, the latest release of Apache Kylin is 4.0.1. Apache Kylin 4.0 is a major version update after Kylin 3.x (HBase Storage). Kylin 4.0 uses Parquet to replace HBase as storage engine, so as to improve file scanning performance. At the same time, Kylin 4.0 reimplements the spark based build engine and query engine, making it possible to separate computing and storage, and better adapt to the technology trend of cloud native.

Kylin 4.0 comprehensively updated the build and query engine, realized the deployment mode without Hadoop dependency, decrease the complexity of deployment. In addition, combined with the feedback of Kylin users and the trend of OLAP technology, Kylin community found that there are still some weaknesses and deficiencies in today’s Apache Kylin, such as the ability of business semantic layer needs to be strengthened and the modification of model/cube is not flexible. With these, we thinking a few things to do::

02 KYLIN AS A MULTI-DIMENSIONAL DATABASE

It is kylin’s unchanging mission to continue to reduce the cost of a single query through precomputation technology so that ordinary people can afford big data. If the multi-dimensional model solves the problem that non-technical personnel can understand data, then precomputation can solve the problem that ordinary people can afford data. Both are necessary conditions for data democratization. Through one calculation and multiple use, the data cost can be shared by multiple users to achieve the scale effect that the more users, the cheaper. Precalculation is Kylin’s traditional strength, but it lacks some flexibility in the change of precalculation model. In order to strengthen the ability to change models flexibly of Kylin and bring more optimization room, Kylin community expects to propose a new metadata format in Kylin in the future to make precalculation more flexible, be able to cope with that table format or business requirements may change at any time.

To sum up, we will make it clear that Kylin’s technical position is a multi-dimensional database. Through multi-dimensional model and precomputation technology, ordinary people can understand and afford big data, and finally realize the vision of data democratization. Meanwhile, for today’s users who use Kylin as the SQL acceleration layer, Kylin will continue to maintain a complete SQL interface to ensure that the precomputation technology can be used by both relational model and multi-dimensional model.
In the figure below, we can clearly see the direction of Kylin’s attention in the future. The newly added and modified parts are roughly marked in blue and orange. 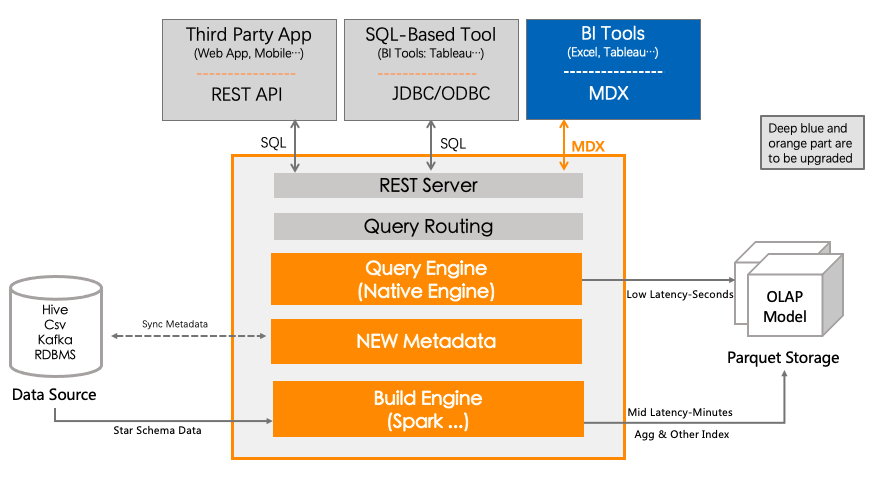 Based on Kylin’s positioning as a multi-dimensional database, combined with the existing capabilities of Kylin that need to be strengthened, and in order to support the long-awaited features of users such as schema change, we plan to introduce a new metadata format of DataModel into Kylin : no longer expose Cube to users, but simplify the metadata dependency to ‘Model -> Table’.
As metadata is the basis and contract for the subsequent collaborative development of Kylin, the design and development of the new metadata format will be the focus of Kylin community’s work at present and in the next few months. The metadata design and discussion proposal will be released later. You are welcome to participate in the discussion. Not surprisingly, the new metadata format will meet you this year.
In addition to metadata format upgrading, the build and query engine which support metadata upgrade, semantic layer capability (MDX), better integration with BI tools and native engine are also the key work that Kylin community has been actively promoting. More like-minded users and developers are welcome to participate in development and promote Kylin community development jointly.